The Twice Moved Old Barn by our House 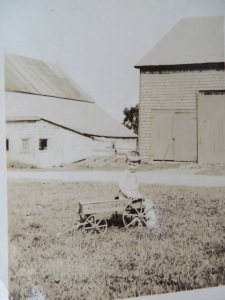 The old barn is at the right.

Edwin Orin Walden (1882- 1937) was a dear Christian man, so said the townspeople of Greenville. He walked stooped over for much of his life because of an accident that broke his back but did not slow him down. Professor Tracy of Yale University who came every summer to the Walden Farm for years said of him, ‘I never knew a man as wonderful. He put up with me for almost 2 years and then one day he took me to a corner of his hay field and told me how to live outside of my classroom.’ He was man of few words; when he spoke he had something to say. And he worked hard on Walden Farm. 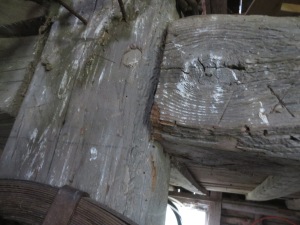 Look closely and you can see the roman numerals.

Around 1910 Edwin wanted a barn for storing farm equipment. So it came to his notice that a barn of good post and beam construction about 4 miles away was for sale. He bought it for 25 dollars and he took it apart numbering each part of the frame – 1, 11, 111, 1v, in roman numerals, and so on probably up to L (50) or so. Then he loaded it on a logging sled, pulled it with 2 large horses across the ice and up the hill to his farm. It took a few loads to get the whole barn moved to the farm. In the spring he began putting it back together, following the numbers he had previously written on the beams. When he was finished that rebuilt barn was again good and sturdy.

In 1942, when our Gramps, Edwin Schuyler Walden (grandson and namesake of Edwin) moved the farmhouse off the original Walden land (which was taken by eminent domain for an airport) to where it is today, he decided that he would bring that barn too. First he took the rocks from a long stone wall and made a base for the barn. Then he jacked up the barn and put a sled of three straight birch trees under it. He let the barn down on the tree sled and hauled it in one piece with a D-8 tractor borrowed (from the outfit building the airport) to where it stands now. 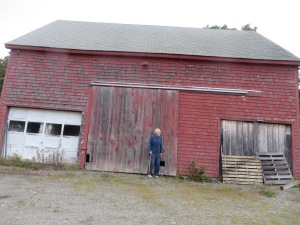 As I look outside our window that lovely old barn reminds me of the old folks who took care not to waste. Before recycle, reuse and upcycle were buzzwords they were a way of life. Folks used and reused everything and their buildings were so well built they stood – and stand – the test of time. Yesterday, Gramps and I went down to the old barn. With appreciation we looked at the work of Grampa Edwin Orin Walden and we remembered the good, kind, hard working man he was.

2 Responses to The Twice Moved Old Barn by our House