Back in the day in the small town of Greenville, Maine, the farmland of five families was seized by eminent domain. The government wanted their land for an airstrip. Two of the farms  were owned by neighbors Jake Drew and Dave Curtis. They both moved less than a mile down on East Road and resettled across the road from each other.

Jake Drew took his house apart, neatly piled the wood onto a wagon and hauled it down the road. It was good pine wood and Jake built himself a nice little cottage complete with a basement, dug well, and a cozy sun porch facing south and closed in. Being the strong yellow dog Democrat he was, he hung a large picture of President Franklin Delano Roosevelt on the wall behind his chair. Often, on summer evenings he could be found sitting in his rocking chair on the porch, relaxing in the sunshine after a busy day. The work of the day was done. The sun was shining. A democrat was in the highest office in the land. Life was good.

Dave Curtis decided he was not going to take apart his house and rebuild it. Instead he took his small photography studio (about 18 by 20 feet), put it on skids and moved it down the road to live in. That was just fine for him and his dog. He had a six cover wood stove to cook and keep warm by and a small 5 by 3 foot table which was usually full of clutter with just enough room left for a plate. He tried to dig a well with the help of Lonnie Rowe but even with help he had no luck. All he got was a 10-foot hole full of mud and water. So every day or so he had to cross the road with a couple of pails and get some water from Jake Drew’s perfectly functioning well.

smoking a pipe. When Dave came for water, there was Jake sitting all happy in his chair with the picture of the President Roosevelt(D) behind him. Dave, a serious rock ribbed Republican, would grit his teeth as he came in and grumble a bit in his peculiar way about President Roosevelt as he passed by the picture to get his water.

Since Roosevelt was elected four times, Dave Curtis had a lot of years to complain (in a good-natured way of course, as was the style of the day) about how the Democrats were ruining the country. The time came when Roosevelt, in the first year of his fourth term, passed away. Shortly after, Dave headed over to Jake’s house for water and he wondered if maybe Jake had taken that picture of Roosevelt down now that he had died.

So Dave took his pails and crossed the road to Jake’s house. He went in and he saw right away that 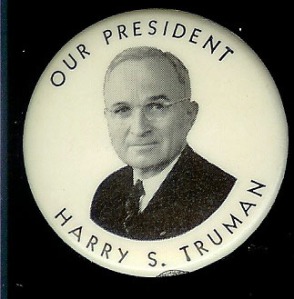 Roosevelt’s picture was indeed gone. Jake was sitting there in his rocking chair as usual but behind him on the wall was a picture of the new president – President Harry S Truman (D). Dave came in, looked up and saw the new picture. This seemed to rile him even more than the old picture of Roosevelt – which I guess he had gotten used to. ‘Sniff Sniff, Truman’s a dahn old fool,’ he opined, and then added with another sniff or two, ‘I wish Roosevelt was back in there.’

Jake, puzzled by this odd turn of events, says to Dave, ‘You never had a good word to say about President Roosevelt when he was living.’

To which Dave replied with perfect logic, ’Sniff sniff sniff. Dahn old Roosevelt, he could never do anything right. He lived longer than he should’ve and died before he oughtta.’