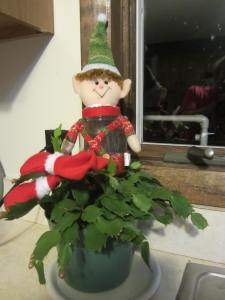 There is a woodsboonie on my kitchen counter, sitting saucily atop the Christmas cactus. Grandfather has given me the heads’ up about woodsboonies.  He was well acquainted with them when he was a boy. So when I saw one here in our kitchen I knew what we were up against. Here is what Gramps told me about the dreaded rapscallions.

“When I was a boy the woodsboonies were characters I played with. To tell the truth, I never saw one, except in my mind. In my imagination they looked like cute, little, funny Irish elves. You’ve seen them working in Santa’s workshop. But I never got anything from them for Christmas; they only brought trouble. If I got caught using Dad’s tools or if I spilled paint, it was the woodsboonies who did it. Unfortunately, they never got my punishment.

They were my imaginary friends …. .no names, just woodsboonies. If they had a name, the sheriff would have put them in jail. I didn’t play with them much; I just blamed them when something went wrong.  If you knew what kind of lickings we got you would understand why we blamed the woodsboonies.

Two maiden ladies came to the Walden Farm when I was young. They were Eleanor Marie Duval and Edith Thompson. We called them Duval and Thompson. I told these ladies all about the woodsboonies, describing them in detail. They were fascinated and wanted me to write down woodsboonie stories in the style of Beatrix Potter. But the woodsboonies had no redeeming qualities and besides, I never got around to it.

Now Duval saw that I was very bowlegged. I could have 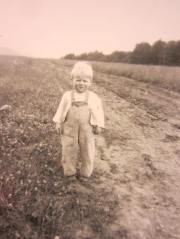 walked down a barrel without touching it. She took it upon herself to rub my legs with whisky to cure the bowleggedness. She overdid it a little bit – it straightened them out and a little more. Now I’m knock-kneed.

Duval found the residents of the Walden farm, while rather intelligent and extremely imaginative, lacking in the social graces. She did her best to civilize us. For example, one morning she said, with a fair amount of disgust and dismay, ‘Why did you brush your teeth in the sink? That is where we wash the dishes!’  We just didn’t know better.

We kids slept up in the attic in the summers so the guests could use the downstairs bedrooms. We’d have to go two stories down to use the bathroom. One night we decided we were too tired to make the trip two flights down so we just went out the window.  The next morning, Duval, who left her water glass and toothbrush out in the fresh air outside her window at night, said, ‘Well, it rained last night. Funny I didn’t hear it.’  We looked at each other and never said a word…..and if we had it would have been the woodsboonies who did it. ”

Grandfather and I are convinced the woodsboonies are still around. Things that go awry in our Maine household of Grandfather, dear husband, Rocket (the cat), and I don’t have to be blamed on one of us. If Gramps can’t find his favorite cooking pan, or the car keys are lost, or the last of the ice cream is gone, we just shrug and say, ‘The woodsboonies are at it again!’

This entry was posted in Uncategorized. Bookmark the permalink.